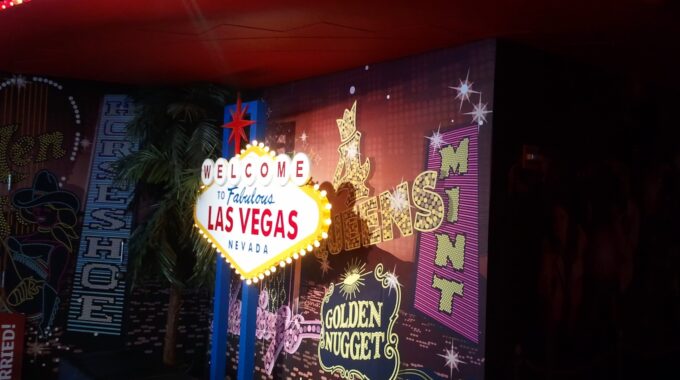 Madame Tussauds is a major tourist attraction in Las Vegas, displaying amazingly realistic waxworks of historical and royal figures, film stars, sports stars and infamous murderers.
For the redesign of the lobby and entryway at Madame Tussauds in Las Vegas, Herrick Goldman, of HG Lighting Design (Brooklyn, NY), required a compact yet powerful LED fixture. The BRICKBLASTER Pro RGBW and WWCW were selected due to their compact size, high intensity output and theatrical grade DMX512 dimming.  At 4” cubed, and an amazing 50 watts, the BRICKBLASTER Pro can fit into places most fixtures can’t.
The compact size of the BRICKBLASTER Pro allowed the fixtures to fit into hidden alcoves throughout the lobby while track mounted fixtures were utilized in the main hallway, which has an extremely low ceiling height of 8 feet.  Additionally, variable color temperature white BRICKBLASTERs were used to illuminate the main entryway and the Madame Tussauds logo, as task lighting for the ticket counter and to provide the main source of lighting for use by the staff photographers.
The lobby at Madame Tussauds boasts a “paparazzi” theme and Herrick strategically programmed the fixtures to wash the area in red light while the white channel of the RGBW fixtures strobes to simulate camera flashes.  Additional fixtures were hidden and are used to generate ambiance in the space.
“We installed the variable color temperature white fixtures in the box office. This area is open to daylight on two sides and we have recently needed to reprogram the fixtures for a dimmer setting as the employees complained that they were too bright”, explains Herrick.
BRICKBLASTER Pro fixtures have also been used throughout the museum to provide front light for wax figures, wall and floor washes in the more dynamic pop culture rooms as well as intense truss warming effects.  Click Here to see more photos on HG Lighting’s Site.
The BRICKBLASTER Pro series has recently been replaced by the MIRO Cube series.  MIRO Cubes can be used as a one for one replacement for BRICKBLASTERs.  For more information on the MIRO Cube Series – Click Here.

Subscribe to our newsletter to receive the latest Black Tank news and alerts,
our latest products, technical insight, and upcoming appearances.