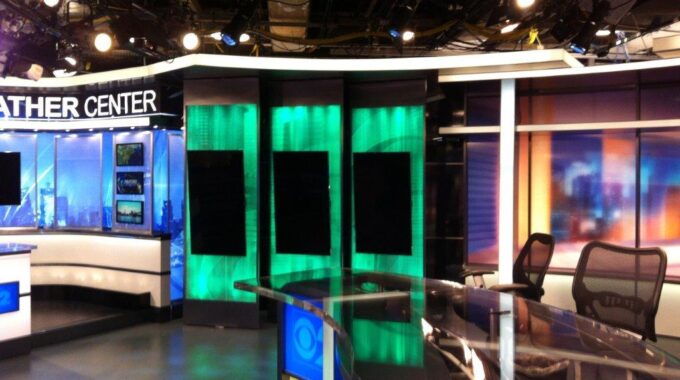 The BRICKBLASTER Pro provides flicker free, high intensity wall washing capability for the new CBS News set – day in and day out.
For the design of the new CBS News set in New York, Gotham Scenic (North Bergen, NJ) required a compact yet powerful LED fixture. The BRICKBLASTER Pro RGBW was selected due to ts compact size, ability to generate an infinite color spectrum and professional grade DMX dimming. The compact size of the BRICKBLASTER Pro allowed Gotham to hide forty eight fixtures throughout the set, out of view from the cameras, to create high impact color washes on different scenic elements. The BRICKBLASTER Pro Series of LED fixtures are known for being able to fit into impossibly small locations and for disappearing on stage or in permanent installations.
Many professional users have experienced “flickering” when utilizing LED fixtures in applications where video or film will be captured. This undesired effect is due to the low pulse width modulation (PWM) rates used to energize the LEDs in some fixtures. During operation, LEDs are pulsed on and off at high frequency. The PWM rate is the frequency which the LEDs are
pulsed – which is generally faster than the human eye can perceive. If the pulse rate is not fast enough the “off” states of the pulse can be captured on video and this undesirable flickering” effect can be observed. The BRICKBLASTER Pro features one of the fastest PWM rates in the industry, which allows for flicker free operation. The BRICKBLASTER Pro’s high PWM rate, full speed DMX control and theatrical grade dimming capabilities make it ideal for use in TV, film, digital video and studio applications.
The Black Tank BRICKBLASTER Pro RGBW is only 4” cubed, 50 watts and can output an amazing 1200 lumens. Their small size, professional feature set and incredible output make them ideal for use in a variety of applications; including concert, theatre, architecture and TV/Film. The BRICKBLASTER Pro is also available as a UV LED black light or as a 3110 lumen
output, white light LED fixture which is capable of generating any color temperature between 2800k and 6500k.
The BRICKBLASTER Pro series’ unique features include a patent pending thermal management system, 120 VAC Input, infinite color output, low power consumption, variable beam angles (20, 40, 60, 60×1, and asymmetrical), rigging to standard lighting track, yoke, linear or stacked arrayed configurations, full speed 8 and 16 bit DMX and standalone operation.
The BRICKBLASTER Pro series has recently been replaced by the MIRO Cube series.  MIRO Cubes can be used as a one for one replacement for BRICKBLASTERs.  For more information on the MIRO Cube Series – Click Here.

Subscribe to our newsletter to receive the latest Black Tank news and alerts,
our latest products, technical insight, and upcoming appearances.